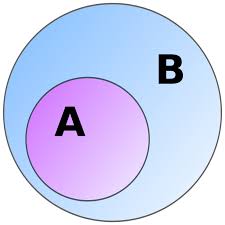 The last post explained how restrictive (or defining) relative clauses create a proper subset of a set. In other words, these clauses classify the noun into two: one that is governed by the relative clause definition; the other that is not.

But an important observation here is, the subsets are not always proper, which means the relative clause can introduce a definition, but the resultant subset is still the original set – an improper subset. What could be the corresponding scenario for a relative clause sentence? Consider the following example:

Yeah, obviously the two sets are the same (the same Indian cricket team that played the two tournaments). (Okay, there were a couple of player changes, but that is not the point here, you know.) It was about the quality of the team. It was about the zeal with which the team played the World Cup, bowling out 7 teams successively before bowing out to Australia – after the humiliating defeats in the Test matches against the Aussies and the tri-nation series against the Aussies and England.

The relative clause “that played the tri-nation series against Australia and England” does not separate the Indian cricket team into two. It relates to two differing qualities of the same team. Talking further about the tournament,

There are no two Dhonis – one who made the difference and one who did not. The relative clause emphasizes the captaincy of the same person, Dhoni.